I apologize in advance if this blog is a bit too long or not so filled with slapstick. Blogs should be short. But it may be tough to bring the threads together in this final blog about my Dad.

BAGMAN: “Even tougher if you waste time talking about it instead of writing it!”

: “Of if you keep interrupting, Brother Baggie.” 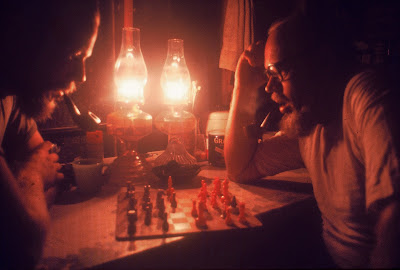 Okay. First of all, a short introductory fact that seems trivial but will be important later. Although the blogs I have written this week would seem to indicate that I spent lots of time on Panther and Dismal Key, the fact is that most of the two decades my father was there, I visited a few times but mostly communicated through letters. Snail-mail, although the terms hadn’t been invented then. The important thing to remember is: It took three days for a letter to go from to , and vice versa.

Second, short introductory background – Two years before the end of my Dad’s hermiting, E. Foster Atkinson passed away and my Dad moved up in rank to the bigger shack on Dismal Key.

Rattlesnakes – The Panther on Panther Key was elusive but rattlesnakes were plentiful throughout the area. On times when I visited, Dad would always give me an extra walking stick which we used, not for walking, but to regularly beat the brush ahead of us and around us, to give these fellows time to slink away. I saw a couple but never got a good shot. My Dad saw them regularly.

There was a tree house on Panther Key that my father had never investigated. But I really wanted to see if it might contain some treasure and was determined to climb up and poke my head in the small entrance hole in the floor. Of course, we were both concerned because it was an ideal place for snakes. So before I climbed up, he and I bounded it unmercifully with our sticks. Then, finally deciding it was safe, I carefully climbed the tree, prepared myself, and stuck my head up through the hole.

Six inches from my eyeballs was a huge coil of scaly diamonds aimed at my nose. I slammed my head back so violently, I put a gash on the back of my neck from the rough wood of the entry hole. But even as one part of my consciousness was preparing my introductory mea culpas to St. Peter, the adrenalin was catching up and I was identifying it as a large rattlesnake skin, shed some time in the past by a large but thankfully now absent reptile.

Enough about snakes, for now.

Amends. Alcoholics Anonymous is built around 12 steps of recovery. The 8th and 9th steps have to do with clearing up the wreckage of our past behaviors, making amends to people we had hurt. I had done this, at least, to the best of my ability. I had written friends, returned money, and in those cases where a simple apology would be meaningless, demonstrated changed (amended) behaviors.

But I had never done one with my father. And why should I, for Pete’s sake? His drinking caused him to leave me with my grandparents. Of course, that turned out to be great for me in the long run (another story) but my alcoholism had done nothing to him. Why would I owe him an amend? I owed him nothing.

But it nagged at me and getting free of guilt is survival for an alcoholic. One day, I had to admit that I had almost always been self-righteous with my father during visits and in letters. I knew we were both alcoholics but I was sober! I had found A.A.! He had tried a thousand times and failed. I preached at him. I refused to give him money. Actually, probably a good decision when dealing with an active alcoholic, but I had done it with an attitude. “You know, Dad, I’d love to help but I think you’ll just drink it up like always.” My tone was such I could have just as easily have added, “You dumb sot!”

I was successful despite him, not because of him. I had become a respected professional and he was a bum. A colorful bum, but still a bum. I told funny stories about panthers, and such, but at a certain level, that was how I felt. I had to get some humility and change that.

So I wrote him a letter expressing regret and love and understanding. I was humble. I took responsibility for my attitudes. I mailed it.

Three days later, I got a letter back from him. It was his amends letter to me.

I hadn't known it, because we didn’t always write that often, but during the last several months, his eyesight had been failing. He could no longer see rattlesnakes and one time a large rattler crawled across his shoe before he noticed it. He finally had to give up hermiting and had moved back to a small camper in .

Being back in civilization meant he was within walking distance of a liquor store. In no time he had drunk himself into yet another detox center. But then…you never know when it will click in…he actually got seriously into the A.A. program and got sober and started working the steps. He never drank again.

I know it has been a long blog, but if you remember in the beginning I mentioned that it took three days for a letter to travel the East Coast. Three days. Each way.

Months later when we were visiting and having the pleasure of actually attending an A.A. meeting together, we compared notes and on the exact same day at roughly the same time in the afternoon, we were, without knowing it, simultaneously writing amends letters to each other. I think that God works in very mysterious ways. Of course, some might say it could also be coincidence and I’m not into debating it.

Either way it was pretty cool.

So, bringing it to a close, he lived in Goodland for about five more years, attending A.A. meetings regularly, helping other alcoholics find sobriety, playing the accordion, painting pictures. He had a chance to meet Karen before he died.

And when he finally died, not of cirrhosis, but of a heart attack, I drove down for his funeral. It was attended by a huge crowd, incredible for someone who had been a hermit. And people got up and spoke of what he had meant in their lives. Men talked about how he had helped them stop drinking and it was because of him that they had their children back. One after another, people spoke about what he had done. I felt they were all looking at me.

Finally, it was my turn. I couldn’t control my voice. I don’t remember the exact words, but I remember it was pretty much like this:

“I’m an alcoholic. My Dad was an alcoholic. He left me when I was six and although we stayed in touch, we really didn’t have much time together on this world. In some ways you all know him better than I did. And I just want to thank you, today, for sharing what he meant to you. Because now, for the first time in my life, I can say without any reservations, that I am proud to be Al Seely’s son.” 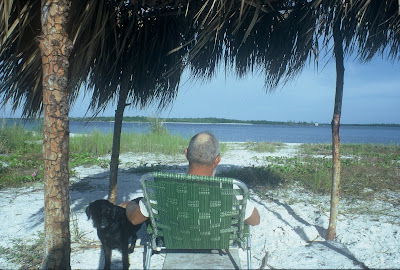 Posted by Bagman and Butler at 6:02 PM