BAGMAN: “Absolutely not! You promised to let me back into your blog after only three! We have an agreement! Besides, by then your followers will all be following other more interesting blogs!”

Okay, okay. Let’s get through “Plot for Novel #2” first. As usual, I hereby relinquish any rights to this idea in hopes that someone else might write it. Preferably Stephen King as this one is a horror thriller. Everyone say, “Ooooh, scaaary.”

BAGMAN: “Well, maybe I take it back. This one sounds interesting.”

: “Go to your room. Mark is busy being a serious non-writer.”

Anyhow, has heard all the lectures from her parents, guidance counselor, teachers, and school resource officer that chatrooms can be dangerous places. She knows full well that, despite their innocent 15-year-old profiles, one of the kids she is kidding around with might actually be a nasty old drooling stalker with bad teeth.

In fact, she has become pretty adept at recognizing them by their inability to keep up with what’s popular among her circle – movies, rock bands, fashion, and internet acronyms. She has even identified a few slimeballs and is having fun getting them to make fools of themselves on-line. She is careful and savvy.

Today, however, is her grandmother’s birthday, God rest her soul. She misses her grandmother and wishes she could talk to her online. Suddenly the idea strikes her! If there actually was a spirit world out there and the souls of dead people were trying with great frustration to contact the living, wouldn’t the increasingly wireless world of the Internet be a good place to start? Duh. Like they can’t just walk in and have a soda with you, but they might be able to line up their ethereal vibes with wireless signals and show up in chatrooms.

So cute little Bethany starts using her detective skills and instead of asking questions about movies and rock bands, she starts asking questions and chatting about tastes and smells and other things she thinks might challenge dead people.

Well, of course, she begins to prove her theory. She begins to hone in on a couple of teenage chatroom regulars that she believes are actually dead. It doesn’t frighten her much. If she can play sexual predators along, ghosts should be a cinch.

But spirits aren’t as dumb. They see the way her queries have changed and know that she is on to them. They don’t like it. They need to stop her. 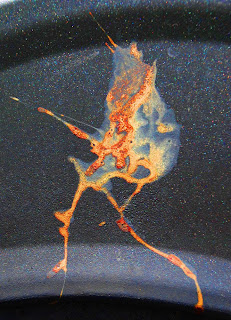 (a stain on my bbq grill)

Being more intelligent, as well as more dead, than the usual predator, they use the internet to lure her into situations where accidents can occur. Here’s where we (or rather you) sell the book rights to . Bus crashes, elevator drops, fires, etc. When that doesn’t work they bring in the big guns – the really scary spirits who can take form and win Academy Awards for make-up with melting faces and long fingernails.

If you think a deviant child predator is scary, imagine one that can dissolve slowly through a door while scary music plays in the background.

But I’m a little ahead of myself, because the dead, like the living, are a diverse bunch. And there are some of them who are kindly and caring. They also figure out what’s going on to and manage to help sweet by keeping her out of buses and elevators at the last minute.

Of course, I don’t have an ending for this book, which is one of the reasons I’ll never write it. Besides, it would take a Stephen King to figure out how spirits fight each other over poor Bethany, who is now getting regularly terrified and will have to be played by a child actress who has good screaming talents. How would two ghosts fight anyhow? Words like crash, bam, kapow, and splat don’t seem to apply. Maybe splat. And how do the dead manage to oxymoronically kill each other?

Heck, a really good novelist might escalate this ghastly battle into a whole purgatorial bloodbath between good and evil. With desperate in the middle, trying and failing to distinguish truth and lies in chatrooms. Long drawn out scenes where you think something is about to happen any minute, followed eventually with plenty of fake blood. 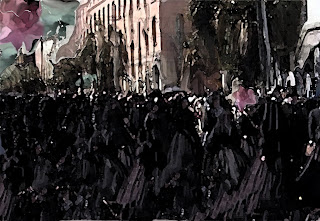 How does it end? That’s up to whoever writes it. Maybe we find out that little has been dead all along although that O’Henry twist has already been well executed in the movie “The Boy Who Saw Dead People.”

Tomorrow, thankfully, the last of the unwritten plots. It will either be the one about spying camcorders or the one about intelligent whales. Bagman says I can’t do both because I promised only three.

BAGMAN: Yeah. You talk way too much anyway.”

Posted by Bagman and Butler at 6:10 PM