First a gratuitous photograph unrelated to anything in today’s post. Despite the testeronic Bagman and because of the commenting Michelle, a picture of a man. 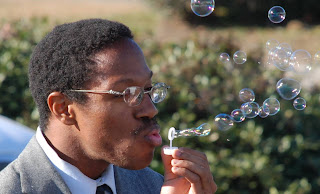 Setting: The present world, Iraq war, economy tanking (come to think of it, the plot of this book might solve the current crisis), Obama president, you and I are reading and writing blogs…Hmm…I suppose if I were writing this book it would need a faster grab in the first paragraph…and a personal hero.

Okay – so for the personal touch, maybe some high tech Homeland Security cop (with a heart of gold, whose girlfriend recently broke up with him) is just about to close in over the Internet on a terrible drug lord – not enough bad guy persona – who also traffics in children. The good guy is about to freeze his money via computer and set up a sting. What the good guy doesn’t know is that a timed bomb is about to blow his building and him to smithereens. (Except, if you are going to write this book, don’t use smithereens because it is a dated and corny word.)

At this point unbeknownst (another word to avoid) to everyone except for astronomers who are enjoying the show, the Earth is passing through the remainders of a comet. Also unbeknownst to even the astronomers, this is a unique comet and it’s tail has…drum roll please…special properties. This is also where you, the future author, have the first challenge of creating what is known in Creative Writing 101 as the reader’s “suspension of disbelief.”

What the comet does to the Earth in the next few hours is to totally erase every single byte of computer memory ever stored anywhere...harddrives, floppy drives, tape back-ups, CD’s, operating systems, everything…pfft. 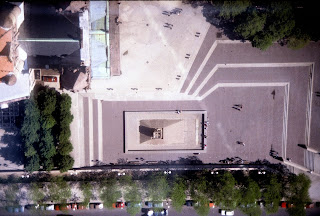 I was tempted there to stop writing and never return to this blog, like a kind of practical joke, like I’d gone pfft…but then I'd have to stop talking which is hard for me.

Of course, the good news is that the bomb doesn’t go off because the digital timer beeping down to zero forgets what time it is. But the hero’s computer also shuts down which keeps him from freezing the bad guy’s offshore assets…and try to avoid asking if it is hard to freeze your assets off in the Caymans…But it doesn’t matter because every bank in the world has just forgotten how much money anyone has anyway, or who owes who what…(hence the solving of the current economic problem…perhaps creating a bigger one). Bankers can’t get to their banks anyway because all the computer controlled engines in their cars don’t remember how to run. Except for antique car collectors who can drive 1947 Packards. At least until the gas runs out because the pumps at gas stations don’t work either

Airplanes don’t fly anymore. This is particularly distressing for people aboard those that had already taken off when the comet passed. (Hint: this piece is a good hook for selling movie rights…lots of screaming and big screen explosions possible).

I’d go on but I never got much further. Because here is where the hard work of writing and continuity would begin. Good guy still chasing bad guy (and somewhere falling in love with someone of course) but in a world where power is turned upside down. Knowledge is power? Pfft. In some ways, at this point, primitive tribes who have never seen computers have more survival skills than the intelligentsia (to use another dated word). Cyber-age to Stone-age in two hours. Electricity, pfft. Cell phones, pfft. Oh yes, pacemakers. Kind of sad that one. Ach! I almost forgot about hospitals! Probably some dramatic scenes there. Hey! The old war in Iraq and Afganistan is over because armored humvees and helicopters aren't moving! But probably new wars are starting up everywhere. And maybe not. There's a lot of human goodness out there as well. Communal living in Central Park. Rebuilding infrastrucure but maybe more sensibly this time. 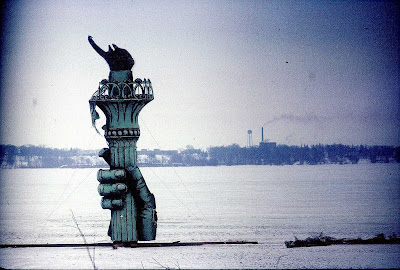 But the plot needs to move forward so, back to basics.. Take your .38 out of the underwear drawer, walk out of the house and into pitch blackness. Go back and get a flashlight…at least something doesn’t have computer chips in it…and walk out into a new old world. Heck, even presidents and world leaders will be in the same boat because the more sophisticated their security, the more things don’t work. Except when they hit the street they are better armed…although some of the fancier laser-directed automatic weapons may malfunction.

It could go anywhere from here. So I’ll throw in another picture and be done with it. Let me know then you’ve written it so I can buy a 1st edition.

Tune in tomorrow for Book Plot 2, a Stephen King special.

Posted by Bagman and Butler at 6:04 AM