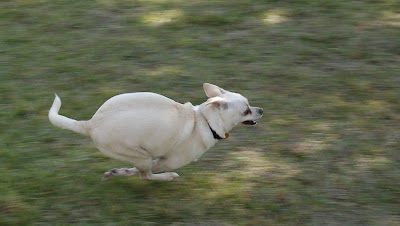 This is just a quick picture blog. This morning I was looking at Finding Sirius's blog and her new Charlie Project with great pictures of dogs and I and wanted to show her this but haven’t figure out how to do it…learning blogspot is a lifetime work, I think. So I decided to just put it here and show it to everyone since there are lots of doggy blogs. Lindsey, for instance at the Explorers View of Life.

I almost didn’t because this is an older picture and belonged to a distant girlfriend of my son who is now married. Not that they look at my blog but…if they did…

BAGMAN: You worry too much!

: No he doesn’t. Not wanting to hurt his daughter-in-law’s feelings is a reasonable ambition.

BAGMAN: How would she even know whose dog it was?

: Because Brian is an honest boy and would tell her.

BAGMAN: Not to mention that the idiot whose body we share just blabbed it!

That’s not the point. Well, some of it is, I guess. The point I struggle with is, as a photographer, shouldn’t the image transcend all that petty stuff. It’s a picture of a fast dog, for Pete’s sake! It’s not a contest between my son’s wife and his past. I mean, why should there be a contest between anybody’s wife and the life they had before they met their spouse?

BAGMAN: You don’t know very much about women, do you?

: You don’t know very much about women, do you?

Well at least I got my internal debating society to finally agree upon something.

But now I'm worried because I linked this to two other blogs...partly because I just discovered I could. Now I wonder if there is some policy or rule or case law about linking. Was I suppose to ask first before linking something to someone's blog? Darn. I really do worry too much!

Posted by Bagman and Butler at 6:48 PM