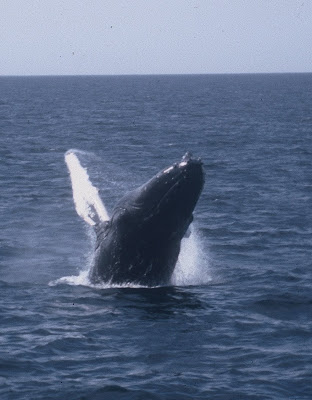 Suggested title: “Song of the Humpback”

I actually worked on this one for about two months, several decades ago, when more countries were making concerted efforts to hunt the right whale into extinction. I wrote the first scene, realized I did not know enough about marine mammals, and spent next 59 days doing research in the Boston Public Library.

I did this partly because I wanted to maintain a little science in the science fiction and partly because the Boston Public Library was a good place to meet girls. (DISCLAIMER: I was not married at the time).

BAGMAN: “Who cares! And what difference does that make anyhow?”

: “It might make a lot of difference to his wife?”

BAGMAN: “She doesn’t read this blog.”

Anyhow, the basic premise of the book was that marine mammals were actually far more intelligent than we ego-centric humans ever imagined. That they were actually the most intelligent species on the planet by a long shot. The only reason they had not constructed cities under the sea was because they had no need of material possessions.

Their lack of opposable thumbs may have had something to do with it too.

They were advanced enough to keep from overpopulating the ocean. Despite the fact that there were many diverse marine mammal cultures – right whales, humpback whales, blue whales, dolphins, orcas, fin whales, etc. – they had no attitudes of superiority or bias and no propensity for war. They had little ego, believed in eternal life, and gave greater value to the aggregate species than to any individual whale.

This was a stretch, but I had to explain why they had never objected to the slaughter of many individual whales in the past.

However…drum roll…extinction of a species was a cosmic no-no even for these peace loving giants. So, by chapter two, there is an underwater convocation of blues, rights, orcas, dolphins, fins, etc. The humpbacks, of course, having the most beautiful and varied songs, are the interpreters. Orcas are rough and tough, kind of right wing and pugnacious . The big slow blue whales are the wisest, and maybe a bit like Buddhist monks. Dolphins are court jesters.

The decide to stop the whaling. They begin to start sinking the whaling fleet. Impossible for an individual whale, of course, but twenty working in unison have no problem. (Here’s the hook – Leviathans lifting boats out of the water, sailors screaming, tidal waves, etc.)

Not surprisingly, this behavior quickly gets the attention of the U.S. Navy which considers it an all out war over control of the planet. 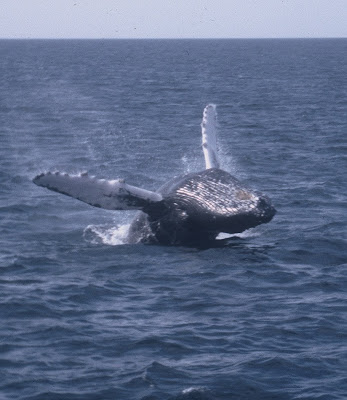 But there is also a large political contingent of environmentalists and broader minded people who exert pressure for an eventual negotiated settlement with marine mammals. This may be a stretch as well, but the book holds that humans are basically good and capable of co-existing with whales. If marine mammals are that intelligent maybe we could learn something, help each other out, they get the oceans, we get the land…utopian future…happy ending. (After sufficient blubbery gore for to buy the rights, of course).

So that was it…except that I did develop one of the characters…the crusty, self-righteous general and chairman of the joint chiefs of staff who stomps around roaring that, “No dumb animals are going to tell me what to do!” Yet throughout the book his wife will go on some junket and stick him dog-sitting duties for their poodle so he will have to periodically leave the war room to walk “Princess” and clean dog poop from his spit-shined shoes. Another stretch, but the irony and comic relief might be worth it.

And this is the end of the Books I’m Not Going to Write series. Maybe. Sometime, in a few weeks, if I can slip around Bagman, I might toss in a fourth one about the tiny flying webcams.

Bagman: “Good! You’re done! But I did notice you avoided mentioning the love scenes between the Humpback whale and the Right whale. Describing sex through the perceptual focus of sonar and echo-location would have been really cool!

Posted by Bagman and Butler at 5:05 AM