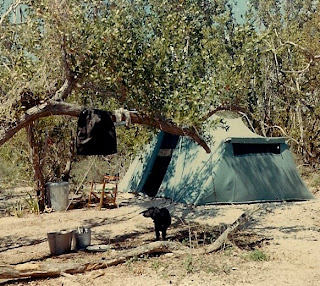 I thought I might finish this multi-part blog in time for the Houses Photo Shoot Out but, then again, maybe not. I was going to write about what dogs chased and what chased them…but someone asked about Foster’s relationship with my Dad…so I may be dragging this out too long.

BAGMAN: “And even (bleeping) longer if you keep wasting space apologizing about everything! Just get on with it, will you?!”

You know, one of these days, I’m going to put Bagman in a big plastic bag, but he also has a point.

When my Dad first went to live out his final few days in the wilderness, he didn’t actually know Panther Key existed. He first went out with an army-navy tent and made a rough campsite on Brush Key and cooked over an open fire. After a few days, Foster showed up scaring the hell out of him at first. 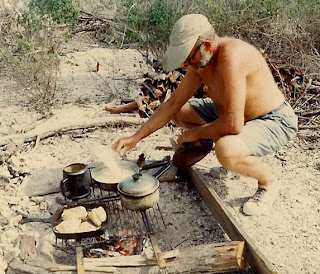 But after sharing life histories, they came to the conclusion that it was just possible that if it was only two hermits it might not constitute an overpopulation catastrophe in 10,000 islands. (Foster admitted that he had never actually counted them, so he was still a little leery at first).

A few months before that, there had been a third hermit – Roy Somebodyorother . But had recently died which is why Foster now ranked and could have the big house on Dismal. (I’ll save a photo for the Houses shoot-out on Friday).

Foster showed my Dad some of the tricks. Like moving bucket and hole (known to us civilized folk as the bathroom) further from the tent and downwind. Which leaves didn’t causes rashes once you ran out of toilet paper. What plants were edible. (I can attest from some of my visits there that there is still a big difference between “edible” and “gourmet delicious.”

Foster warned him about some of the things to look out for. Rattlesnakes, sharks, mountain lions, the rare alligator that managed to stomach salt water, and worst of all the periodic seasonal turtle poachers that would show up drunk in the middle of the night to kill sea turtles for their shells and eggs.

One year my Dad, in a fit of anger at these redneck assholes, tried to defend a mother turtle. He confronted them with reason, threats of legal action, and a bow and arrow. A bow and arrow? And just like the Indians facing the Europeans in past generations, he spent the rest of the night lying under bushes while random gunshots separated by mean laughter put holes in his tent and, tragically, his first dog.

The next day Foster also told him about the smaller shack sitting up on stilts on Panther key. My Dad figured that Foster hadn’t mentioned this earlier because he didn’t expect him to last long before going back to civilization. But now that it looked like he was staying awhile, Foster took him to the Panther Key.

They were friends for many years although they often went weeks without seeing each other. From the beginning, Foster made it clear that hermits were hermits. They could help each other but he hadn’t come all this way in order to hang out with someone, spending every other night cooking marshmallows, singing campfire songs, and playing gin rummy. They lived 45 minutes away from each other by boat if you didn’t get lost. They checked in periodically if one or the other was going to town…or just to make sure the other was still alive. 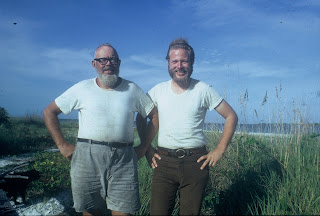 Just act natural as if you're both not wondering

when the self-timer on the tripod will finally go click.

Posted by Bagman and Butler at 5:58 AM