It didn’t tale long for Al Seely to know he had been fooled. Instead of following his doctor’s prognosis and dying quickly from cirrhosis of the liver, he was getting healthier. Despite its positive points, the prospect of living presented him with the unexpected problem of employment.

BAGMAN (sliding into the livingroom, playing air guitar like Tom Cruise, in a white dress shirt and briefs, singing loudly):

Finding and holding employment in civilization had been impossible for him in civilization which is why he received a monthly disability check. His original plan was to take his leaky boat into every month, pick up his stipend, buy a little food and a lot of booze, and start drinking himself to death on the trip back. But it never worked.

The next morning he would inevitably come to, still alive, lost somewhere in the Ten Thousand Islands and, hungover, have to find his way back to Panther Key. Once there, he would have to find a supplemental income to make it through the next 29 days. 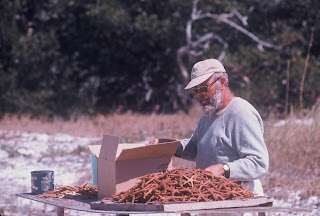 His first entrepreneurial effort was to collect dead starfish that washed up on his beach. He would spread them out to dry in the son turning, Panther Key into Pungent Key. He could then sell them wholesale at a nickel apiece to middlemen who would then take them to souvenir shops around and sell them to tourists.

He was not one of the world’s great artists but he was one of the world’s few hermit artists and the Ten Thousand Islands offered a unique confluence of resources. In addition to dead starfish, the area was rich with sport fish, savvy charter fishing boat captains, and guilt-ridden doctors, lawyers and dentists from .

The guys who ran the fishing boats were shrewd about giving their rich charters a “unique” experience in order to get good tips. They would tell every group they took into the Gulf, “I don’t do this for everyone but you guys are special and, if you want, I might be able to introduce you to the Hermit of Panther Key. He doesn’t like company, but in this case, he might not mind.” They usually did this at the end of the charter, when these upper class, middle-aged, beer-bellied gentlemen were beginning to rehearse the lines they would use to get back into the good graces of the fishing widows they had left behind in the Big Apple. Their past peace offerings of bracelets, earrings, perfumes, and more earrings were losing value.

But my Dad could take a faded wallet photograph of a doctor’s wife and turn it into a primitive likeness in oils in about an hour. They sold like hotcakes. The New Yorkers left with a key to good graces, the charter captains were assured of a better tip, and my Dad would get a few bucks, some of the day’s catch, and usually a six-pack of beer or fifth of top shelf liquor.

After awhile, it was almost a daily occurrence for my father to have big old fishing boats pull up to Panther Key. .”

Foster, who had tucked himself further away from boat traffic, scoffed at him. But Dad was doing well. His health was good and he making a better living than ever before in his life. The Miami Herald came out and wrote a feature on him. He became friends with Don Shuler, Larry Csonka and several other members of the then-champion Miami Dolphins. 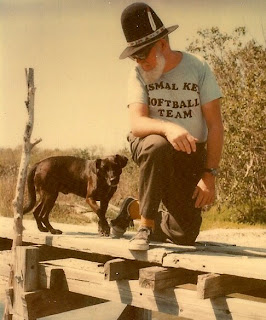 He even once showed me a large bound book of signatures and said, “I’m the only hermit in the world with a guest book!”

The starfish were happy too because he stopped collecting them and started picking them up and throwing them back into the ocean. There’s an old popular motivational story about that but I will save it for another day.

Tomorrow will be the last hermit post – Rattlesnakes, Failing Eyesight, and Alcoholics Anonymous. Then the photo shootout on houses for Friday. Just running hard trying to keep up…LOL.

BAGMAN: “And when are you going to untie me from my chair so I can take a field trip to !”

Posted by Bagman and Butler at 6:26 AM