The Case of the Panther of Panther Key


There was always a big debate in that neck of the woods about whether there were really any panthers on Panther Key. I’m not a zoologist so I’m not sure whether the species in question was panther, puma, mountain lion, cougar, or if there is even a difference.

Neither Foster nor my Dad ever actually saw one, although on rare occasions, they both saw footprints. But I am here to testify that, yes, there was a panther on Panther Key on at least one occasion.

I had the claw marks to prove it. 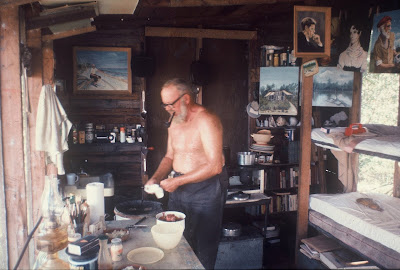 First, I’d like to draw your attention to Exhibit I, above. This is an unretouched photograph of the exact location of where the adventure occurred. This photograph was taken approximately 8 hours prior to the event itself.

The jury will please note by how calmly my father is washing dishes that he is unaware of what the night will bring.

BAGMAN: “Please tell me that you’re not going to write this like a courtroom thing!”

: “Order! Order! He’s trying to prove the existence of a Panther on Panther and the presentation of evidence is appropriate. Please sit down.”

BAGMAN “Okay then, wise guy, how can you tell from the photo that he’s washing dishes and not filleting a fish, or cleaning blood from a murder weapon.”

: “We aren’t even talking about a murder here! You can’t cross-examine about something that is not in evidence.”

I’m not listening to these guys. To continue, I posted the photograph to show you the interior of the shack on Panther Key so you could picture what happens later. In particular, please note the end of the wooden bunk bed in the right of the picture. This is the foot of the bunk and, although it doesn’t show well in the picture, the roof curves back so there is less clearance near the head of the top bunk than at the foot. A minor, but important fact.

BAGMAN: “But there IS evidence of a murder. I distinctly see a painting of John F. Kennedy in the background. He was murdered! Why is there a painting here? 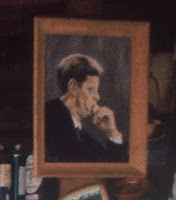 Sucked in again. But I can explain it, as well as the other paintings. Like my grandfather, my Dad was an artist. In all honesty, my grandfather who I’ll talk about in the future, was a respected artist and dean of the in . He didn’t think much of my father’s primitive and self-taught style. But my Dad did well as an amateur. Many people were willing to shell out a few bucks and a case of beer in order to own a painting done by a real hermit.

Anyway, to keep this story to blog-length, I’ll jump forward to about in a pitch black night.

BAGMAN: “Objection! How do you know it was ? There was not electricity, no clocks, and absolutely no light…not even ambient street lights!”

: “Can you tell us what happened next?”

Suddenly, sounding like it was six inches from my head came the ear-splitting, blood-curdling roar of a Panther.

BAGMAN: “Objection! How do you know it was a panther!”

I may not be a zoologist, but I’m an experienced zoo-visitor. I’ve heard lions roar, tigers roar, bears roar…”

BAGMAN: “Lions and tigers and bears, oh my!”

: “One more outburst like that and I’ll charge you with plagiarism from lyrics in the Wizard of Oz.”

In other places I’ve lived, I’ve also heard guttural roars of raccoons, dogs, birds, paperboys stubbing their toes…in short, I swear without reservation that this was the roar of a huge cat. If it wasn’t a panther or puma, then it was a Tiger or a Lion. In retrospect, it was probably just outside the wall of the shack but when it erupted, so did I. I bounced out of my bunk and (remember the slanting roof?) slammed my head into the ceiling.

Apparently it had the same affect on Willie who launched upward to such height that when I bounced back from the ceiling onto my top bunk, Willie was just landing on top of me, his front paws scratching my face.

BAGMAN: “Oh what a cheap bait and switch! You had us thinking the claw marks came from the panther! Liar, liar, pants on fire!”

It was pitch black. I naturally assumed that the animal on top of me was the same one that made the roar. I erupted upward again, screaming, and this time both Willie and I together slammed against the ceiling. But now, flailing wildly, we both missed the top bunk on our way down. We were saved from crashing on the floor by my father who, equally startled had just rolled out of the bottom bunk in time for Willie and I to land on top of him. 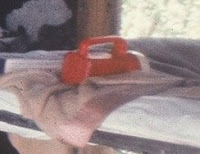 Also blind in the night, he assumed that not one but two panthers were in the shack attacking him. So he screamed, I screamed, Willie made noises not common to dogs, and we all rolled flailing, scratching, screaming onto the table where he had been doing dishes (or cleaning fish). Cups, saucers, pots, pans, kerosene lamp all flew crashing everywhere. Leaping away in different directions, we dislodged the painting of JFK and everything else on the wall. In 10 short seconds of slapstick, we managed to completely destroy the inside of his shack, until he found a flashlight and got the kerosene lamp back together and lit.

BAGMAN: “And the alleged panther?”

My guess is that after it roared, the screaming, crashing, barking noises coming out of the shack scared it more than it had scared us. It probably didn’t stop running until it got back to the . In fact, we are probably the reason there are no more mountain lions in .

But that night, there was a Panther on Panther key.

I rest my case. Court’s adjourned. 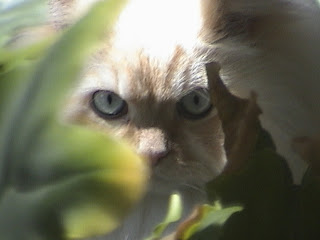 Posted by Bagman and Butler at 4:49 AM